With the World T20 championships being held in the West Indies (fixtures released during this series) and two touring sides in Europe over the summer, a three way T20 series suits all the teams. Three days of double headers were planned, with each team having to play twice on one day, not something they are used to, or likely to have to do in the tournament, but compared to playing a 50 over one-day game, shouldn’t be too much different.

The first day, 20 June, was SAs turn to play twice, first up NZ, fresh of record breaking games in Ireland. SA put them in and they posted the highest ever T20I stand, man or woman, between Bates and Devine of 182, Devine the one to miss out on a ton with 72 inc 4x4s and 4x6s, Bates going on to 124 (breaking Edwards record for T20 runs) and the White Ferns to a total breaking their own womens T20I score with 216-1.

Needing over 10 an over, once Lee was the first wicket to fall, caught keeper Martin, bowled Devine, was always going to be tricky, but when three wickets fell on the score of 40 it was lost. Van Neikerk continued her good from from the ODIs with another 50 and combined with experienced bat de Preez, to put on a 79 run stand, both striking at over a run a ball, but there were not enough balls and SA ended 66 runs short.

England decided to bat and the opening pair of Wyatt&Beaumont got off to a flyer, with 4 of the fist 6 powerplay overs going for more than 10 runs, including 15 boundaries and 50 up in the 5th over. though Wyatt had started like a train, Beaumont had caught up and by the time the score was 100, at the end of the 9th, she had passed Wyatt and 50. 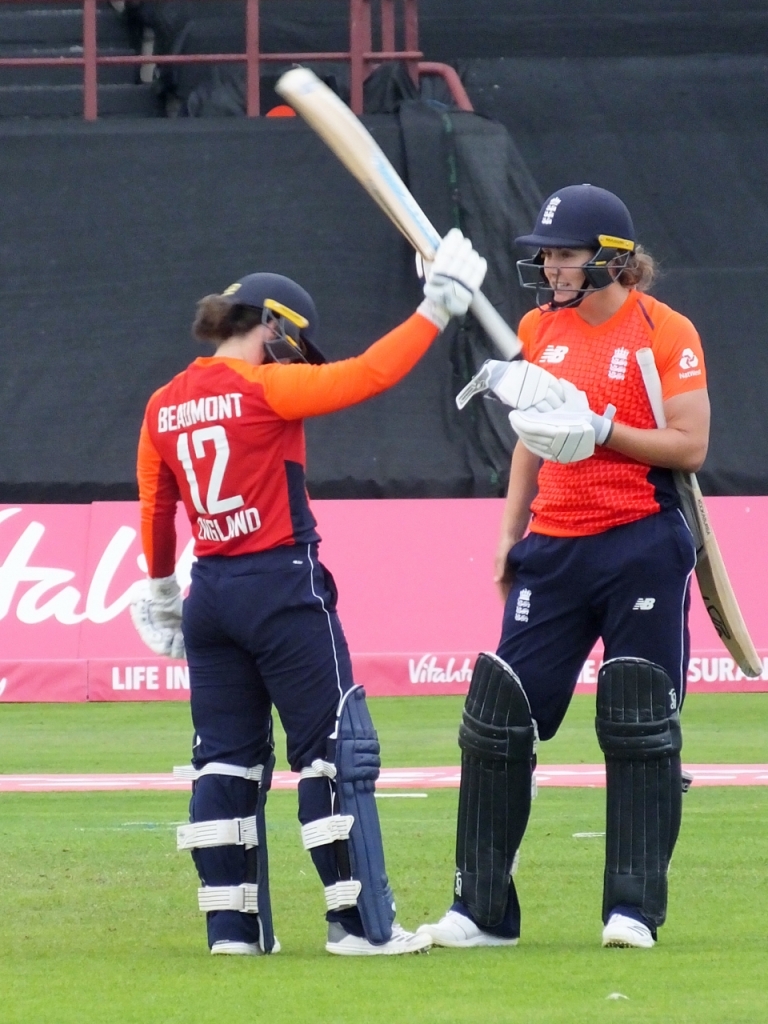 Beaumont fell for 116, lobbing a return catch to a grateful Lackay, off 52 balls, her ton coming from 42. Sciver and Brunt combined for a quick 50 stand in less than 4 overs, leaving SA to chase a new record score of 250 – 42 boundaries were scored in total, itself a record.

Lee lasted longer (19) and van Niekerk (72) scored more than in the previous game, and two fifties in the day, but they were never likely to get anywhere close, falling 121 runs short from their 20.

It was Englands’ day to play two games, June 23, first up SA. Having set a world record in the previous game on the same ground, the saffers must have really hoped their skipper would win the toss.  Beaumont continued where she left off, scoring another 50, but a change of SA personnel got Wyatt early and wickets continued to fall, England closing on a normally reasonable 160-5.

England made an early inroad with Wolvaardt gone in Shrubsole’s first over, but Luus who has struggled for runs on the tour (being unlucky with runouts) combined with Lee for a hundred stand for the second wicket, leaving South Africa in the box seat to chase down the total. Both made 50, Luus still there at the end to hit a 6 to win the game.

Knight continued her success at the toss, and batted yet again. Wyatt got off quickly but was first to fall, and having scored success 50’s Beaumont was out early too. But Sciver steadied the middle of the innings to surpass the score of the first game. 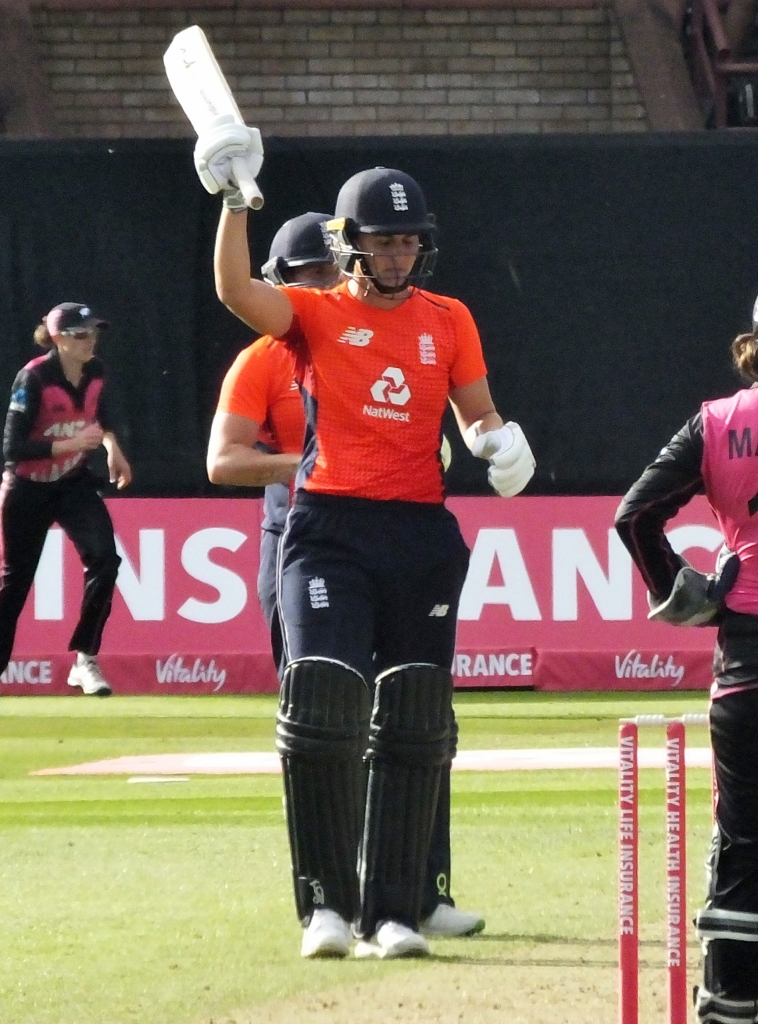 The Devine/Bates powerhouse that had put on world breaking partnership on the first day was broken early by left arm seamer Farrant making her first appearance in an England shirt in a few years. Bates fell to Brunt and from there wickets fell frequently, the highest kiwi partnership the fourth wicket at 30, skipper Knight nabbing a couple too, the Kiwis ending all out 54 runs short with 9 balls to spare.

New Zealand were last to play a double header, June 26 just up the road in Bristol, knowing bar an enormous loss to SA, the final was Eng v NZ.

SA won the toss and batted, but no-one really got going, Luus falling to a fall touched on to the stumps by Bates. Tryon, one of the fastest scorers in the womens game did her best to push the score on, with 33 off just 19 balls, but SA finished 148/6. In reply Bates/Devine put on 130 for the first wicket, and the final was pretty much assured. A few were expecting a shuffle of the NZ batting order, but they continued as listed and past the SA total 2 overs later.

Match 2 was Eng v NZ, a prelim of the final on sunday, and so the kiwis changed up their side, although not really the batting order.

Bates won the toss and as normal batted first, but may have regretted it when out without scoring in the second over. The highest partnership was 49, between Devine and Satterthwaite, but whilst Devine hung around, she ran out of partners at the other end, being the last wicket to fall at 129. 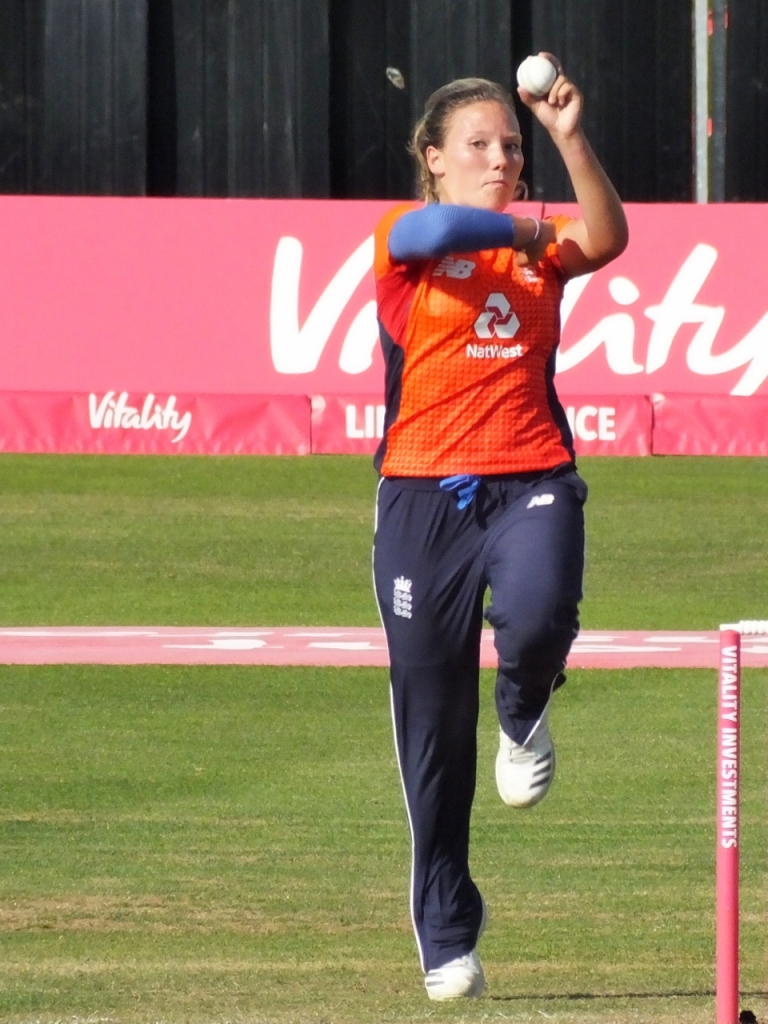 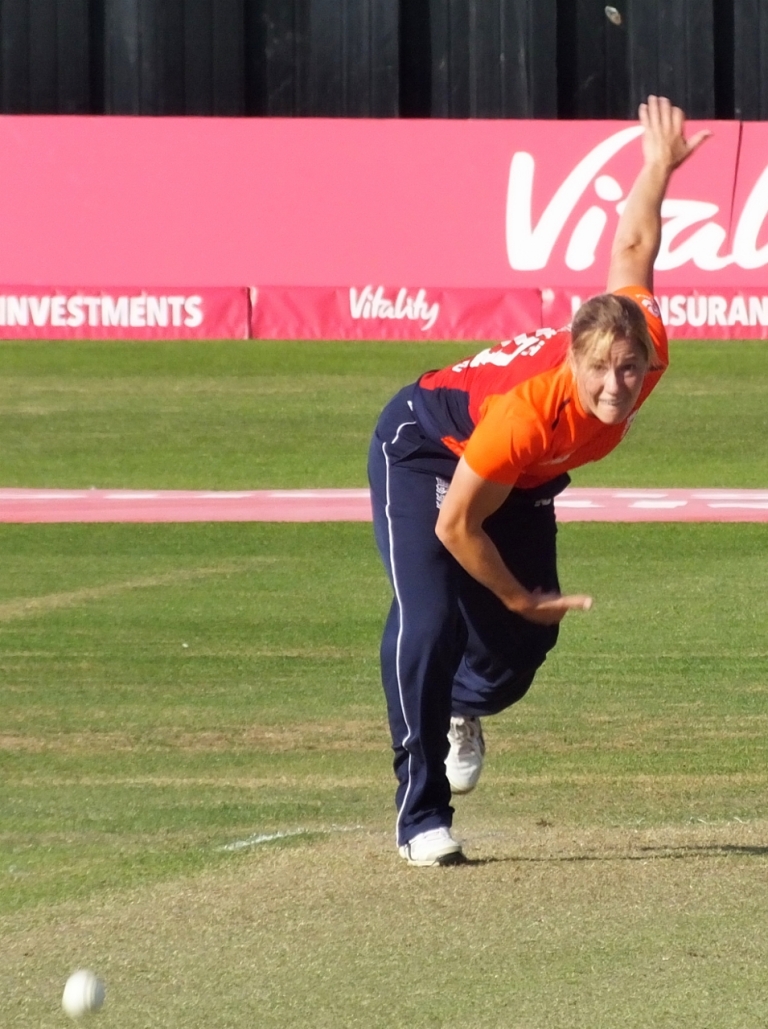 In reply, the kiwis must have thought they were in with a chance with both openers gone for 22, both falling to newcomer Jess Watkin, but Taylor and Sciver combined and although Taylor fell just after her 50, Knight continued to seal the dress rehearsal.

Bates won the toss and batted, as in the warm up on thursday and a 50 opening stand fired Brunt up, often dangerous. 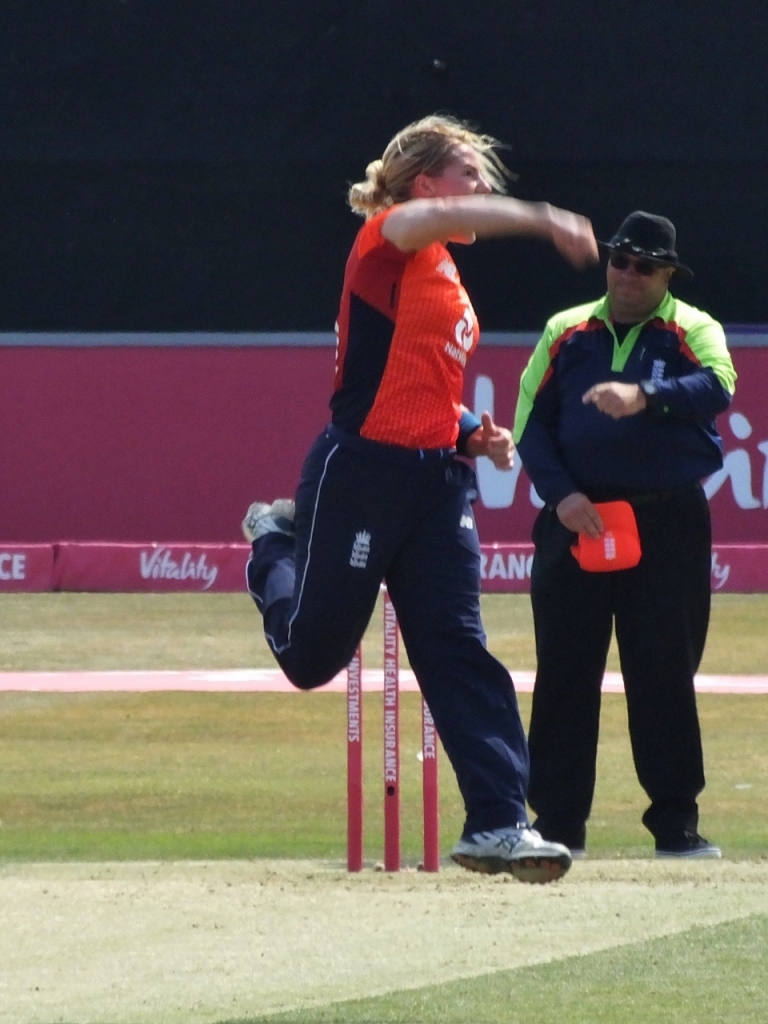 Martins followed swiftly and then Bates fell to Ecclestone, her 9th of the mini-tournament

In reply, Wyatt got off to another flyer with 50 off 33 balls, as part of an 81 run partnership, which in less than 10 overs put England on course to win.