Game 3 felt like deja vu of the first game – big stadium, small crowd, a reasonable opening stand for the white ferns, with aussie quick Schutt bowling from one end, until the young aussie spin bowlers started taking wickets left, right and centre…. so far so familiar.

Priest/Bates made 36, at a run a ball, until Priest missed one from Wellington and was stumped by Healy – the umpire went upstairs, Priest knew she was out. Bates and Satterthwaite added another 33 until Schutt took the catch offered by Satterthwaite at cow corner 18, 69-2. When Bates fell for 31, NZ were 70-3 in the 13th over, and it felt like the chances of the kiwis getting the 140+ plus that was thought to be required to give them a chance  were gone.

Wellington took three wickets in that over, Bates, Martin bowled for 1 (in the weirdest manner ever when the ball bounced next to her, the momentum of her bat hit the ball into the stumps) and Perry lbw 0, leaving NZ 71-5 after 13. Peterson managed to push the score to 91 before getting run out by the aussie skipper, then Bermingham, Green, Kerr and Tahuhu then all chipped in to reach 113-8.

The kiwis also went with their normal opening bowlers, Tahuhu and Huddleston, but the first aussie wicket fell to a quick piece of fielding, when the ball hit by Lanning didn’t get through the ring on the on side and Mooney had got too far down the track, 6-1 in the first.

From 6-1 at the end of the first, the home side collapsed (think that is the term) to 9-5 (five wickets) at the end of five overs – Huddleston bowling a maiden to start, followed by a double wicket maiden and had figures of 2-2-0-2, taking Lanning caught behind 5, and Villani  lbw 0, and then in the fifth over Tahuhu got in the act; Gardner caught behind for an eleven ball duck and Jonassen caught by Perry in the ring at cover for 2.

Healy and Blackwell came together to steady the ship, putting on a partnership of 26 – the scoreboard told us so – with every run greeted by applause, until Healy took on 16 year old student Amelia Kerr (here with permission from Tawa College) and was caught by Peterson inside the ring, 35-6 with half the overs to go. 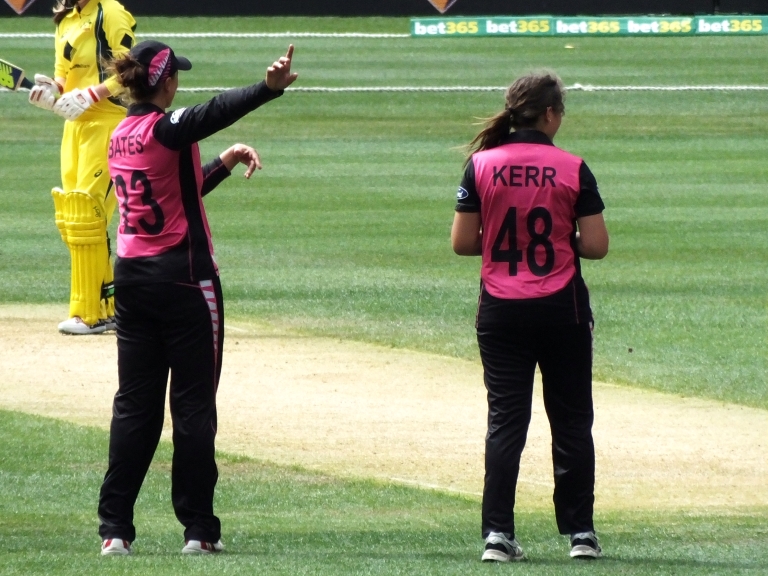 From there Blackwell (carrying a hamstring strain) had to marshal the tail, including all those young bowlers, and took the total through 50, inducing rapturous applause, but was to be stranded on 30, as Bates, Kerr, Peterson and finally a damp squib of run out did for remainder of the home team, 47 runs shy (for Southern Stars’ lowest T20I total) and four overs left… This time seam had been the difference.

Kiwi skipper Bates was player of match and series.

Australia all out for 66 (!) and New Zealand take the final game of the series by 47 runs and the series 2-1, and both teams move to NZ for three ODIs.

Game 2 at Geelong (as in g’long), is an hour outside Melbourne whether by car or or train, and after showers in the city, this correspondent decided to save already worn feet on a chilly day and stay on the sofa – I know, insufficient commitment! It would appear lots of locals had similar thoughts, despite the ticket sellers pushing the two for the price of one game angle, the crowd seemed ‘slight’ again.

The game was another win for young bowlers, on a green looking wicket in a strangely shaped ground restrained by the road, although apparently the boundary was 59m (!) all around the wicket, that you would think would favour the quicks.

With Australia only fielding one quick, and in sunshine, Schutt offered too much width to trouble those holding bats and warmed up her fielders, NZ opening strongly with 20 after 2 overs. The introduction of those spin options slowed the Kiwi total significantly, and Strano, having taken her first international wicket in her first game, having grown up very close to the ground, managed to put on a show taking 5 for 10 off her 4 overs.

The rain did play a part; they’d played on through 2 sets of something I’d call stronger than drizzle, but eventually went off the field after the 7th over of the aussie reply, and when they came back the Australian reply had been shortened by 7 overs, the total required was now 70.

The more cloudy conditions when they’d started the second innings meant that Tahuhu bowled her 4 on the bounce for 11, three swing and misses in her first over and a rare T20I maiden in her third. This lead to a complication with bowling allowances and much discussion between skipper and umpire as Tahuhu had bowled her 4 before the rain break, also completing foxing the commentary crew, although pretty obvious. All this meant that Anna Peterson bowled the last over for the White Ferns, Australia needing 11 off it, and although she had one T2oI wicket (and 10 in ODIs) there was a question the commentary team couldn’t answer as to what she bowled – the answer as Mark Nicolas said, was wickets, a hat-trick off the first three balls of the over (the sixth in T20I history and first by a kiwi and the first in Australia), followed by a dot, 1, 1 and a run out, meant NZ won by 8 runs (D/L) and leaves the series tied for the last game at Adelaide on Wednesday.

Game one was a win for the theory that you blood youngsters when they are in form and comfortable. Both sides were missing some key players after the WBBL, Ellyse Perry and Sophie Devine the biggest of them – Australia fielded three debutants, New Zealand had none, but they do have a couple of newer players.

NZ won the toss and put the aussies in and took two quick wickets, one of a new opening pair the in form Beth Mooney and then debutant Ashleigh Gardner unlucky with  a run out having only faced one ball. That brought to the middle Elyse Villani who is used to opening so felt at home with a new ball and also very used to batting with the other opener – aussie captain and the worlds best bat Meg Lanning.  These two combined at 20-2 (sorry 2-20 in aussie money) in the fifth over, stabilised and then rode the luck that saw the last ball of the seventh over heaved to square leg straight down the throat of the fielder, and one of NZ’s newer players, Leigh Kasparek and all in the ground expected it to be taken, but it went straight through the hands, and to add insult to injury ran into the rope! 40-2 did not become 40-3, and Lanning was not out for 28, but went on to put on another 90 runs for the third wicket.  Lanning eventually fell for 60 at mid on to a good sliding catch by the opening bowler Huddlestone, another of NZs newer recruits, although Villani remained unbeaten including taking 15 off the 10th over and going on to pass 1,000 T20I runs.

NZ used their established opening pair, Bates and Priest and Bates took the game to the bowlers, starting faster than the aussies, no doubt aware that her team needed 7.5 an over.

NZ never really got going, with the aussies already in the box seat, and only having 5 frontline bowlers meaning that the debutant bowlers, Strano the local girl and Wellington, knew they were going to get their full allocation and rose to the occasion. Also Lanning swapped her bowlers round early on giving the kiwis no time to settle but also her bowlers not too long stressing about their first over – Molly Strano bowled the third, went for 3 runs and got a big cheer from the, shall we call it, slight crowd.  When Priest was the first to fall, to a finally successful Lanning catch off Strano (having had three go her way, one of which a complete sitter), five overs had gone but the scoreboard only read 30.

Wellington was the pick of the aussie bowlers, not just on the numbers, 3-15 from her 4 bowled on the bounce – miserly with no boundaries.

When the kiwi skipper Bates fell just over half way through the overs with the score not yet a third to the required total, the dearth of boundaries meant the writing was on the cards. There was only really one realistic fly in the ointment – the tall left-hander who had become the first player to score three ODI centuries in a row against Pakistan before Christmas. However, Sattertwaite was unable to get going, or seemed unaware of how many overs had gone, and wickets carried on falling at the other end, the required rate was going up, but only in the final over did she show the type of shots that would have been required from the last 10 overs were the kiwis to have ever had a chance.

Kiwis ended up 40 runs short, the aussies go to coastal Geelong on sunday one up in the three game T20 series, before the teams head to NZ for a three game ODI series.